Up close and personal with Borneo primates
Labuk Bay Proboscis Monkey Sanctuary situated in Sandakan mile 19, Jalan Labuk Lintas. In Malay they are known as “Monyet Belanda”. These species are good swimmers and only swim when is necessary or for pleasure. You can only found them at certain parts of Borneo.

The monkeys inhabits forests newar coastal swamps or those containing rivers and lakes.
The only place in the world where you can see proboscis monkeys is the Island of Borneo in South-East Asia. They are forest-dwellers and limited mainly to coastal swamp forests next to large rivers.

Eric Mjoberg, wrote that “the enormous nose is a sounding board that strengthens and deepens the male’s vocal powers… The sound is deep and nasal, strongly reminiscent of the bass viol. Possibly too, there is some aesthetic touch in it, for the females find the sound attractive and crowd round their musically gifted leader.”


According the tour guide (Mr. Junjun) they are very protected to their family members. They won't
allowed any bachelor group disturbing or even come closer to his family. He will fight and make sure his family safe all the time. FYI they are not dangerous as long as you don't touch or hurt them. 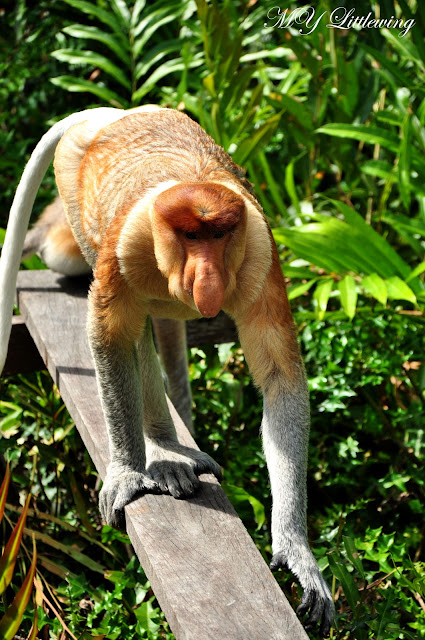 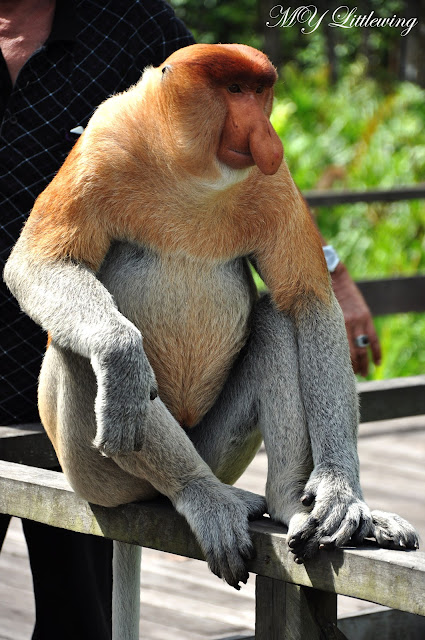 To Marina, Junjun, Jonathan and LBPMS staff I would like to say thank you very much for giving me the opportunity and your tremendous assistant during my visit over there. I had a good time and wonderful experienced to explored and discovered myself about proboscis monkey species and Labuk Bay Proboscis Monkey Sanctuary as well. Hope to visit again in the near future to gain more experience and enjoy the nature.

Important information for you to take note about Labuk Bay Proboscis Monkey Sanctuary ;-
There is a shuttle-bus provided by LBPMS @ RM15 per-way. From town ----> Sepilok ---->LBPMS which is depart from Hotel Sandakan at 9.30 am to Sepilok Center & Sepilok Junction at 10.30 am.

de engineur said…
very interesting pics of the proboscis monkey. Hope to be able to visit there one day.
14 March 2012 at 14:22

Nava K said…
Awesome experience seeing nature and then the monkeys living life contented in this environment. I am so trilled looking at the pics and the green surrounding is so serene.
14 March 2012 at 16:08

Unknown said…
Indeed it was a great place to pay a visit, you gonna enjoy and love it and it is more worthy if you bring along your family.
14 March 2012 at 21:02

Unknown said…
Absolutely right I had a good and fun time seeing the unique species like proboscis monkey and only can bee seen in Borneo.
14 March 2012 at 21:05